The Changing Nature of Shia Politics in the Contemporary Middle East

Relations between Sunnis and Shi is, the two main sects of Islam, have been tense for generations. Yet it is only recently that they have become confrontational, at times displaying worrying signs of deep hostility. Inter-confessional strife has been on the rise owing to the dynamic nature of politics in Muslim states during the second half of the twentieth century. The transformation of Shi i Iran into an Islamic Republic, the Soviet war in Afghanistan and the resulting jihad and the civil war in Lebanon all added to an already complex relationship between the sects, as has, more recently, the transformation of majority-Shi i Iraq into Iran s close spiritual and political ally. Revolution, civil war, internal unrest and regime change have all galvanised Shi i communities into direct political action, regionally and internationally. Conflict between the two sects has further intensified in the geopolitical fallout from the Arab uprisings that began in 2011, placing Shi is and their allies at the vortex of regional developments such as those in Bahrain, Yemen, Iraq and Syria. Even as Sunni Islamists gain power in several Arab countries, this book reminds us that Sunni Shi i relations have been marked by cooperation as well as conflict. A dispassionate study of Shi i politics in modern times, it further argues that the relationship matters more to the Middle East now, and to the Muslim world, than at any time since the demise of the Ottoman Empire.

Professor Anoushiravan Ehteshami is the Nasser al-Mohammad Al-Sabah Chair in International Relations and Director of the HH Sheikh Nasser al-Mohammad Al-Sabah Programme in International Relations, Regional Politics and Security, both at Durham University. He has been a Fellow of the World Economic Forum, and was elected in 2011 as a member of the WEF s foremost body, the Global Agenda Councils. Dr Mahjoob Zweiri is Associate Professor in Contemporary History and Politics of the Middle East and Head of the Humanities Department at Qatar University. He was a senior researcher in Middle East Politics and Iran at the Center for Strategic Studies, University of Jordan. He was also a Fellow of the School of Government and International Affairs, Durham University, and served as Director of the University s Centre for Iranian Studies.

Next
The Struggle of Major Powers over Syria
Previous
Najaf 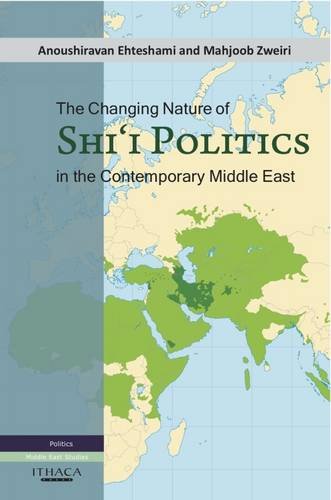