Security Arrangements in the Persian Gulf

The strategic and economic characteristics of the Persian Gulf have made it of critical importance to all the states bordering its coastline, as well as the entire world’s economy and political life. Its significant geopolitical situation, in addition to its dominant position as an energy source and gateway for global energy, has caused the Gulf to be a worthy rival to outside powers, particularly those in the West, while also being amongst the most unstable and chaotic of any world regions. The objective of this book is to understand the reasons for the failure of security models in the Persian Gulf and to provide a new model that addresses the need for a stable and peaceful structure of relationships, provides security for all individual littoral states, and also assures the interests of the external powers. To this end, the book analyses the various security models adopted in this vitally important geopolitical region since 1962, with special reference to Iran’s foreign policy. Particular reference has been made to Iran because of its geostrategic and geopolitical situation and its role as the hegemonic power in the Persian Gulf. Indeed, regardless of its political regimes, Iran has significant national security concerns and plays a determinant role in the overall peace and security of the region.

Dr Mahboubeh Sadeghinia is a Visiting Research Fellow at the School of Government and International Affairs at Durham University. Having worked as an international journalist and also political researcher in Iran and Jordan during 1980-2003, her current research interests are foreign policy, political economy, security and strategic issues in Iran and in the Middle East/Persian Gulf.

Next
The Nabati Poetry of the UAE
Previous
Through the Wall of Fire – Armenia-Iraq-Palestine; From Wrath to Reconciliation 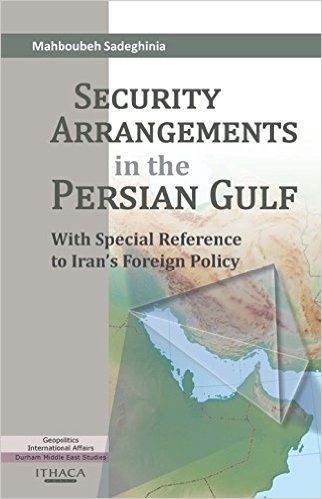