As is often the case with oral literature, we know nothing of the origins of Arabic poetry. The first surviving pieces, from the beginning of the sixth century, are fully developed, and the period from then till the second quarter of the seventh century was remarkable for the amount and quality of the poetry that was composed. In later times it was acknowledged as the zenith of Arabic poetic composition, notable for its many masterpieces. Learning to appreciate this early poetry is difficult, for a range of reasons: it is the work of people of a very alien milieu – the great composers were camel-dependant nomads; it has an extraordinarily rich vocabulary; its grammar has many complications that do not survive in the later language; its texts were transmitted orally for up to two-and-a-half centuries; and there are serious problems about authenticity. Yet all later Arabic poetry stems from it, and it is important for our understanding of the language and ideas current in Arabia at the rise of Islam. Its study is therefore a necessity for all serious students of Arabic. This new edition of Early Arabic Poetry combines the two volumes first published in 1992 and 1996, bringing them together with a new foreword and introduction by Professor Jones, which covers the major background problems faced by students of early Arabic poetry. The text itself comprises two main sections: section one contains a study of fifteen poems from two of the more vivid genres: laments and poems by the outlaws, the latter including the magnificent, brooding Lamiyyat al-‘Arab; whilst section two focuses on famous odes, such as the Mu’allaqat of Imru’ ul-Qays, Labid and ‘Abid, the Kafiyya of Zuhayr and the Marthiya of Abu Dhu’ayb. The poems are analysed in minute detail, providing the student with all the information needed to understand the texts and the accompanying translations, and then to consider each poem’s overall thrust and purpose.

Alan Jones taught at Arabic, Turkish and Islamic Studies at Oxford from 1957 to 2000, when he retired from his post as Professor of Classical Arabic. Amongst his special interests are pre-Islamic poetry, the Qur’an, and the early growth of Islamic studies. He has also published key works on the poetry of Muslim Spain. His translation of the Qur’an was published in 2007. 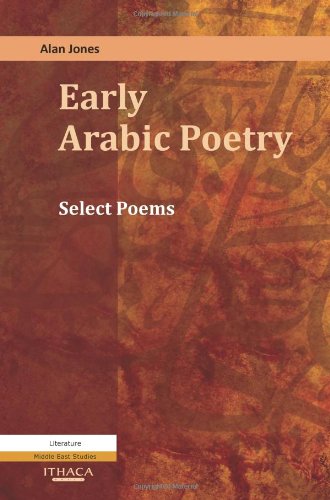