The Travels of Ibn Battuta to Central Asia

The original “Travels of Ibn Battuta” ranks highly amongst the masterpieces of Arabic geographical literature and is of great significance in the understanding of the history of the peoples inhabiting the Central Asian states. In 1325 Ibn Battuta, a traveller and adventurer from Tangiers, embarked on an extraordinary journey via Mecca to Egypt, East Africa, India and China (also visiting Spain and crossing the Sahara to Timbuktu), and returned some 30 years later to write up his experiences. In his study of the Travels of Ibn Battuta, Ibrahimov Nema tulla Ibrahimovich details the life and travels of Ibn Battuta to give the reader an idea of the extent of the adventures and also to provide insights into the remarkable traveller himself. He then chronicles both lay and learned opinion over the centuries with regard to the amazing yet controversial journey, showing the doubt that existed towards the authenticity of the tales: were they simply a fantastic invention or were they real experiences? To illustrate his argument, Ibrahimovich then selects a passage from “The Travels” concerning Central Asia, given here in both the original Arabic and also in English, and provides extensive historical and philological commentary and notes on the passage in order to persuade the reader of their authenticity and value in the understanding of the peoples of Central Asia in the 14th century. Finally, a detailed bibliography will prompt the interested reader to further studies in this field. Ibn Battuta filled many of the gaps in the local chronicles of his time with his interesting observations and person al impressions. Ibrahimov Nematulla Ibrahimovich succeeds in his aim of illustrating how the narration of Ibn Battut a gives us a bright and realistic picture of the cultural, political and social life in central Asia in the first half of the 14th century. 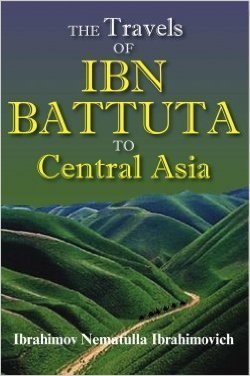