Al-Yamama in the Early Islamic Era

Al-Yamama, the ancient name of a region of the Arabian peninsula which is thought to have roughly coincided with today’s administrative district of al-Riyadh, was from the sixth century until the end of the Umayyad caliphate the centre of a diverse economy and thriving local culture. This title documents the little known historical geography and political development of al-Yamama in the pre-Islamic era, drawing together a wealth of information on its geography, ecology, population, settlement patterns, economy and history. Professor al-Askar argues that a marked regional identity emerged among the people of al-Yamama during this period and persisted until its economic productivity seriously declined in the ninth century and the region lost much of its population. This identity owed a great deal to the ecology of al-Yamama and its economic structure, as well as to its control of trans-peninsular trade routes, which brought its population into frequent contact with Persians to the East and Hijazis to the West, and allowed them to perceive the cultural differences between themselves and their neighbours. Its existence also helps our understanding of political movements in al-Yamama such as the attempt by the Banu Hanifa to establish a state, the reign of King Hawdha b. ‘Ali, the false prophet Musaylima’s attempt to establish a theocratic state and, much later, the Kharijite revolt of Najda b. ‘Amir.

Abdullah al-Askar is Associate Professor of History at King Saud University, Riyadh. He received his Ph.D. from the University of California, Los Angeles. 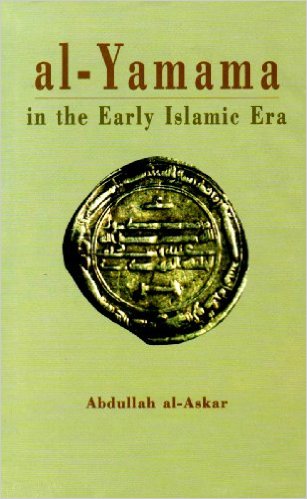