The journal Shi’r (1957-70) was a professional avant-garde monthly journal founded in Beirut by Yusuf al-Khal with a group of young poets and was dedicated to poetry and poetic studies. The journal supported poetic experimentation and became a centre of various types of cultural practice. In the course of time, the activities of the group that were linked to the journal were consolidated in what was called ‘the Shi’r movement’. This book examines the ongoing debates about Shi’r which continued after its closure in 1970, and the growing tendency among Arab critics, intellectuals and ideologists to associate literary movements that pursued innovation and change, with the movement of modernity in the Arab World.Most of the writers who investigate and evaluate the practices and contributions of “Shi’r” define the prose poem as central to “Shi’r’s” aspiration for cultural change, yet Arab critics who explore the works of the “Shi’r” group tend to treat the work of each writer as an individual accomplishment. Consequently, the journal was seen merely as a meeting venue and a medium for conducting individual experiments and pursuing personal careers. The group was also perceived as an insular gathering dominated by a competitive spirit, and by sectarian and political connections.Basing its analysis on the major writings about “Shi’r” and the prose poem in Arabic and English, the book seeks to demonstrate that these conventional methods of viewing the “Shi’r” project still breed misconceptions about the group and their writings and still affect adversely the studies of the Arabic prose poem. Taking as its basis recent groundbreaking writings on modern cultural and literary studies in general, and on studies of the prose poem in particular, the book will attempt to search for a new perspective to redefine the place of “Shi’r” and the prose poem within the battleground of Arabic modern poetry.

Otared Haidar teaches Arabic studies at the Oriental Institute of the University of Oxford.

Next
Refusing to be Enemies: Palestinian and Israeli Nonviolent Resistance to the Israeli Occupation
Previous
The Palestinian Exodus: 1948-1998 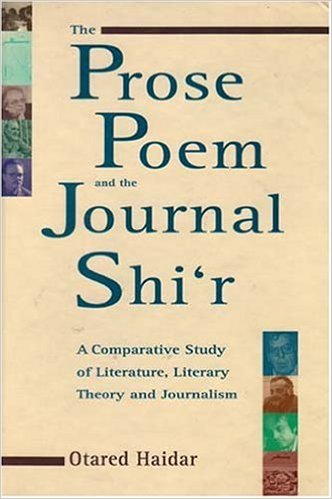