This title deals with an important and often neglected subject: the Palestinian exodus and the creation of the refugee problem. The intimate and causal connection between the refugee exodus and the creation of the Jewish state in Palestine has rarely been defined and the two issues have customarily been treated as separate events. This book analyses this connection and reviews the Palestinian exodus from 1948, through 1967, right up to the present time with the continuing expulsion of Palestinians from Jerusalem. It explores the themes of compensation for Palestinians, the right of return of the refugees to Israel and the feasibility of return. It also sets out a vision for a future solution to the refugee problem, which remains an outstanding obstacle in the way of a lasting peace between the two sides. By bringing together historians, academics and legal experts to provide different perspectives, this book aims to address all the major aspects of this complex issue. As such, it forms essential reading for scholars and also for general readers concerned with the primary causes of and the solutions to the Palestinian-Israeli conflict.

Ghada Karmi was born in Jerusalem but brought up in Britain. She qualified as a doctor of medicine at the University of Bristol before diversifying her field and gaining a Ph.D. in medieval Islamic medicine from the University of London. She has been a political activist concerned with the Arab-Israeli conflict since the 1970s and has written extensively on the subject. She is also a regular contributor to the debate in the British media. Ghada Karmi is currently Research Associate at the Centre of Near and Middle Eastern Studies, School of Oriental and African Studies (SOAS), University of London. In 1994 she set up the International Campaign for Jerusalem which she currently chairs.

Eugene Cotran (LLD) has been a circuit judge in England since 1992. He is a visiting professor of Law at the School of Oriental and African Studies (SOAS), University of London, and the Chairman of the Centre of Islamic and Middle Eastern Law at the School. He was formerly a practising barrister in England and the Commonwealth, and a law commissioner and high court judge in Kenya. He is a board member of the Palestinian Independent Commission for Citizen Rights. He has numerous publications on the laws of Africa, the Commonwealth and the Middle East and is the General Editor of Butterworth’s Emigration Law Service and the Year Book of Islamic and Middle Eastern Law. 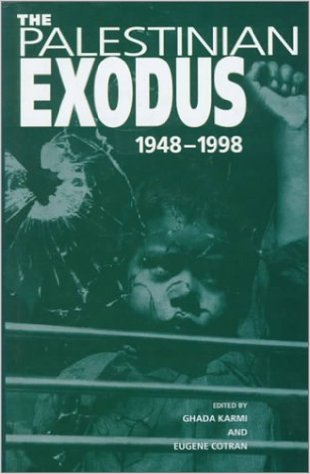