Refusing to be Enemies: Palestinian and Israeli Nonviolent Resistance to the Israeli Occupation

Refusing to be Enemies: Palestinian and Israeli Nonviolent Resistance to the Israeli Occupation presents the voices of over 100 practitioners and theorists of nonviolence, the vast majority either Palestinian or Israeli, as they reflect on their own involvement in nonviolent resistance and speak about the nonviolent strategies and tactics employed by Palestinian and Israeli organizations, both separately and in joint initiatives. From examples of effective nonviolent campaigns to consideration of obstacles encountered by nonviolent organizations and the special challenges of joint struggle, the book explores ways in which a more effective nonviolent movement may be built. In their own words, activists share their hopes and visions for the future and discuss the internal and external changes needed for their organizations, and the nonviolent movement as a whole, to successfully pursue their goal of a just peace in the region. A foreword on the definition and nature of nonviolence by Canadian author Ursula Franklin, analytic essays by activists Ghassan Andoni (Palestinian), Jeff Halper (Israeli), Jonathan Kuttab (a Palestinian activist lawyer with international experience) and Starhawk (an international of Jewish background), and an epilogue from the author, round out the book. Andoni offers an analysis based on his long experience of nonviolent activism in Palestine, while Halper postulates five necessary components of an approach to nonviolence that goes beyond the simply tactical. Kuttab argues that, even given the Palestinians ‘legal right to armed struggle, nonviolence is more effective and suitable for resistance’, and Starhawk describes the unique challenges faced by Palestinian nonviolence.

Maxine Kaufman-Lacusta lived in Jerusalem for seven years and has written widely on Palestinian and Israeli nonviolent activism and related topics.

Ursula Franklin is a Quaker physicist, co-founder of Voice of Women for Peace (VOW-Canada) and author of The Ursula Franklin Reader: Pacifism as a Map (Between the Lines, 2006).

Ghassan Andoni is a cofounder of the Palestinian Center for Rapprochement and the International Solidarity Movement (ISM).

Jeff Halper is cofounder and coordinator of the Israeli Committee against House Demolitions. His most recent book is An Israeli in Palestine: Resisting Dispossession, Redeeming Israel (Pluto, 2008).

Jonathan Kuttab has practised law in Palestine, Israel and New York State. His activism spans the realms of human rights, social and church advocacy, and he has written and lectured widely. His legal/human rights writing includes co-authorship of West Bank and the Rule of Law (ICJ, 1980).

Starhawk  is a peace, environmental and global justice activist whose books include Webs of Power: Notes from the Global Uprising (New Society Publishers, 2002) and has volunteered with the ISM four times in the Occupied Territories. 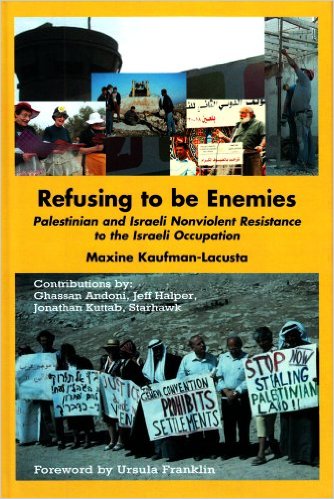