Diluvial Soils and Their Amelioration

Professor Mukhtar Abduyev’s pioneering work was the result of ten years of study, field research and laboratory experimentation on salinized diluvial soils in the foothill plains and steppe of Azerbaijan. At a time of increased demand for agricultural land this work was a most timely contribution to bringing the country’s foothill plains, a major soil reserve, into play. Important as the work was for Prof. Abduyev’s native land, however, it had even wider implications. Because there are other forms of salinization in Azerbaijan, the work herein facilitated comparative analysis of their distinctive characteristics – common to the arid regions of many other countries. In Diluvial Soils and their Amelioration, as in his other works, Prof. Abduyev moves from rigorous scientific analysis of the problem and its origins to the development of techniques to return salinized land to productive efficiency; a true demonstration of science in practical action. In 1970, the original Russian edition of the work was nominated by the Academy of Sciences of the Azerbaijan SSR for the V.V. Dokuchayev Award for distinguished contributions to soil science.

Mukhtar Abduyev (1926 – 79), Doctor of Agricultural Science, was respected across the USSR for his work on the amelioration of saline and polluted land. He had a lifelong connection with the Azerbaijan SSR’s Institute of Soil Sciences and Agricultural Chemistry, founding and leading the country’s first Soil Reclamation Laboratory there. He also inspired many talented students at the Azerbaijan State University and other institutions. In 1970 he was awarded the USSR’s medal for Valorous Labour. 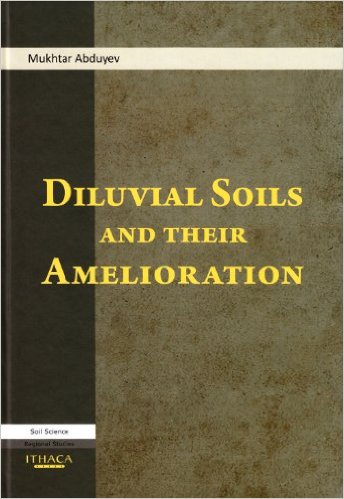