Years of Blood: A History of the Armenian-Muslim Clashes in the Caucasus, 1905-1906

Presented for the first time in English, Mammad Said Ordubadi’s Years of Blood: A History of the Armenian-Azerbaijani Clashes in the Caucasus, 1905-1906, provides detailed reports of the tragic events of those dramatic years. Written during the aftershock and completed in 1908, the book was not published until 1911, but immediately impressed for its use of local correspondents. Later, however, it was removed from public view as it did not comply with official ideology. Ordubadi was a celebrated historical researcher, journalist, novelist and librettist, but assessments of his writings made no mention of Years of Blood. Written in his native Azerbaijani in the Arabic script in use at that time, one of the principal sources on the Armenian-Muslim conflicts of 1905-1906 has remained obscured from scholarship until now. In view of the still unresolved Nagorno-Karabagh war between Armenia and Azerbaijan, this English translation of historical record is timely; for Ordubadi notes in his book a situation that continues today: ‘Along with the Russian and Caucasian press, European and American publications speak heatedly and exhibit the closest interest in these events and their causes. We should also know that the articles published in the foreign press are full of contradictions and differences.’

Mammad Said Ordubadi  was an Azerbaijani writer, poet, playwright and journalist. He was well-known for his enlightenment activity in Russian Azerbaijan and the rest of Caucasus in the beginning of the 20th century. He first started writing in the 1890s and had his first work published in 1903, in Shargi-Rus (Oriental Russia) a newspaper in Tbilisi, Georgia. In his early publications Ordubadi criticised ignorance, backwardness and religious fanaticism. In 1906 he published his poetry book Qeflat (Ignorance) and in 1907 Vatan va hurriyy t (Fatherland and Freedom). He wrote for several Azerbaijani publications, including Mulla Nasraddin, Irshad, Sada; and others. Ordubadi covered various political, social and educational issues. He firmly stood for the necessity of the enlightenment of the Azerbaijani society under the Russian rule. In 1911, Ordubadi published a book Qanl s n l r; (Bloody years) – a collection of first-hand accounts of the Armenian-Tatar massacres in 1905-1906, which has now for the first time been translated into English. In 1915, Russian authorities arrested him and exiled to Tsaritsyn. In 1918, he joined the Communist Party and returned to Baku in May 1920, after the Bolshevik conquest of Azerbaijan.

Next
The Last Khedive of Egypt: Memoirs of Abbas Hilmi II
Previous
The Experience of Islamic Art on the Margins of Islam 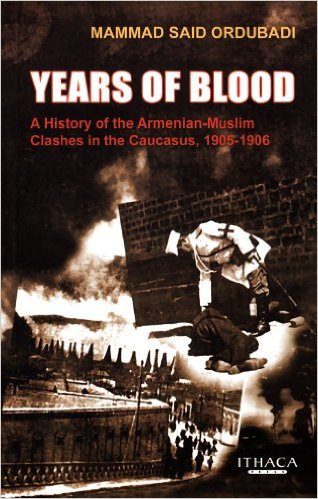