Republished in a new translation, The Green Book provides fresh insight into the thinking of Muammar Al Gathafi, and his Third Universal Theory for a new democratic society. Outlined first is his theory for direct democracy in society, or Jamahiriya, focusing on the authority of the people, renouncing representation or delegation of authority, and recognizing the need for organization of the people at lower levels of society. Part Two suggests an economic revolution, transforming societies of wage earners into companies of partners by applying a political and economic theory of social organization that gives the ownership, and regulation of production, distribution and exchange to the community as a whole. Part Three launches a social revolution, presenting solutions to man’s struggles in life, and the unsolved problems of man and woman, as well as tackling the situation of minorities by laying out sound principles of social life for all mankind.

Muammar Al Gathafi was one of the Arab world’s longest-serving leaders. He came to power in a bloodless coup in 1969. In the late 1970s he set up the “Great Jamahiriya”, or the state of the masses. The system is based around ‘people’s committees’ and is free of partisan politics. Muammar Al Gathafi was born in the desert near Sirte in 1942 and died in the Battle of Sirte in 2011. 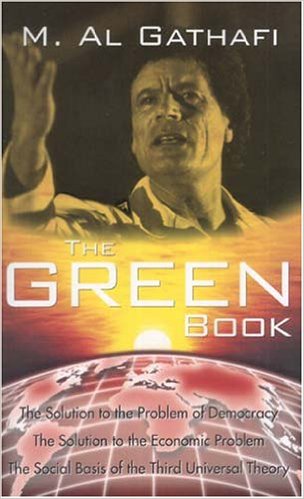