The Iraqi Marshlands and the Marsh Arabs: The Ma’dan, Their Culture and the Environment

The people of the Iraqi Marshlands are heirs to a culture that can be traced back thousands of years, and prior to the 1970s (i.e. before they were systematically desiccated by Saddam), these marshes comprised the largest wetland ecosystem in the Middle East. It is also a site considered by many scholars as the inspiration for the biblical Garden of Eden in the Bible and the Koran, as well as the site where the Great Flood occurred, and the birthplace of the patriarch Abraham. The Iraqi Marshlands are therefore an area of major significance in the history of the three monotheistic religions: Christianity, Islam and Judaism.”The Iraqi Marshlands, Its People and Culture” will be the definitive text for all those wishing to develop an in-depth understanding of a rich cultural legacy and lifestyle that survives today only as a fragmented cultural inheritance. The book clearly and compassionately illustrates how, until recent decades, the economy and lives of the Ma’dan (Marsh Arabs) that spans over five thousand years remained similar to the ancient practices of their Sumerian forbears, and how the current marsh dwellers with their impressive reed houses (mudhif) and long canoes (mashufs) are our only link with this rich cultural past.The book is also a moving testament to these forgotten people, whose habitats, villages and very lives were progressively snuffed out by the Iraqi government during the repressive reign of Saddam Hussein. It highlights precisely how and why Saddam methodically tried to destroy these wetlands, and explores the enormous international efforts now underway to restore them. Finally, the book also demonstrates the inevitable environmental consequences of Saddam’s massive destruction of the marshes: the extinction of endangered species of birds, animals and plants that were endemic to the marshes and are found nowhere else.

Sam Kubba is an award-winning architect whose practice includes projects in the US, UK and Middle East. The book’s other contributions have all been written by experts within their respective fields such as Abbas F. Jamali, Hamed T. Haykal, Mudhafar Salim, Barry G. Warner, Ali Douabul, Jamal Abaychi, Mufid A, Samarai, and Jasim Al Asadi

Next
Madmen at the Helm: Pathology and Politics in the Arab Spring
Previous
Iran’s Foreign Policy: From Khatami to Ahmadinejad 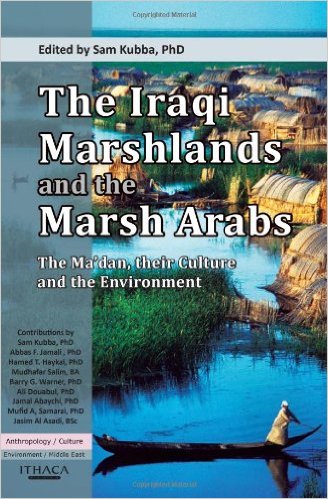