An account of French imperial policy in Syria between 1927 and 1936. Based largely on 30,000 pages of French diplomatic papers, released in the late 1980s at the Centre des Archives Diplomatiques in Nantes, this study analyses the process of French decision-making in Syria between the end of the Great Revolt in 1927 and the Franco-Syrian Treaty of September 1936. Using a chronological framework, Peter Shambrook specifically analyses seven subjects. First, the variety of tactics – some more subtle than others – employed by the French authorities to outmanoeuvre the growing Syrian/Arab nationalist movement; second, the “unprepared” elections of 1928 and the prepared ones of 1931-2; third, French efforts to produce a Syrian constituent assembly, constitution and parliament, that would ratify a Franco-Syrian treaty a la Francaise; fourth, French attempts to anaesthetize Syrian politics between 1934 and 1935; fifth, the French decision to change course and negotiate an agreement with the Syrian nationalists in 1936 following the General Strike; sixth, the lengthy and complex treaty negotiations between the Syrian delegation and two successive French governments, leading to the Franco-Syrian Treaty of Friendship and Alliance of 9 September 1936; seventh, developments and divisions within the Syrian nationalist movement. The last chapter of the book goes beyond the period of review describing the tumultuous, final decade of France’s occupation of Syria (1936-46), which saw the refusal of successive French governments to ratify the Treaty, the Anglo-Free French invasion of Vichy Syria in 1941 and the latter’s emergence as a sovereign, independent state at the end of the Second World War.

Peter A. Shambrook obtained his Ph.D. in Middle Eastern history from the University of Cambridge. Currently living in Norwich and engaged in research, he has held the post of Research Fellow at the Centre for Lebanese Studies in Oxford (1997) and was also Programme Director for the British-Arab University Association (1974-87). 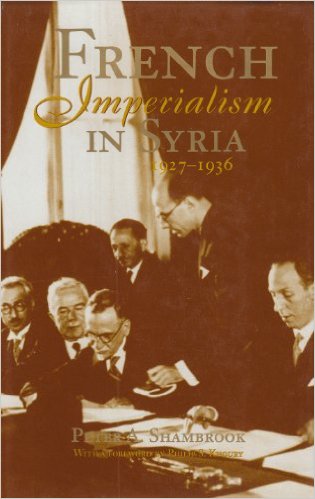